I think I bought this bedroom set something like 10 years ago, but now it’s sitting in my driveway waiting to get picked up by the Salvation Army tomorrow.

Soon it will be someone else’s bedroom set, which is fine by me because it’s one less mountain of furniture standing between me and actually getting our garage somewhat organized again… 😛

Truth be told, we haven’t actually used this stuff for a while now. I’ve had it for ten years, but most of those years were spent in our guest room once we upgraded to a king mattress and couldn’t use any of it in our own bedroom anymore. I guess we used the dresser and nightstands a bit longer until we finally got a whole new bedroom set earlier this year, and of course now that pretty much all of the bedrooms in our house are to be filled with little boys, there really won’t be much need for guest room furniture until we’re able to buy a new house altogether!

Sorry, anyone coming to visit us in the next couple of years. 😛

I remember buying this stuff shortly after I moved into my second apartment. I was trying to class things up a bit, doing away with my infamous cloud-covered bedsheets from Walmart in favor of plain colored, though slightly softer, boring adult ones. I really wanted a bedroom that was tropically themed and this set from Kanes was the closest thing that I could find. In fact, here’s an even better blast from the past with a couple of photos including the admittedly kind of tacky comforter that wasn’t all that comfortable that I tracked down at some consignment store in South Tampa because I refused to pay $400 at Bed, Bath & Beyond for a proper bedding set… 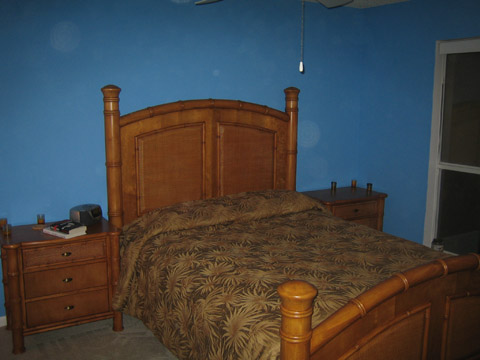 We actually still have that comforter – it occasionally makes appearances out in our living room and is entirely too big for the couch, on top of also being quite uncomfortable to boot. But hey, I was a 25 year-old single guy trying to outfit a bedroom all by myself – I think given the circumstances I actually did pretty good!

…though if my memory also serves me, I do believe that when I started dating Sara and she moved in circa six months after this, one of her first efforts was to paint over that blue with some nice jungle green that admittedly did suit the furniture much better! We even bought new curtains to match and everything – something that I haven’t really cared about in at least three of the last places we’ve lived in since. 😉